Elin Lanto: 'Love Made Me Do It' 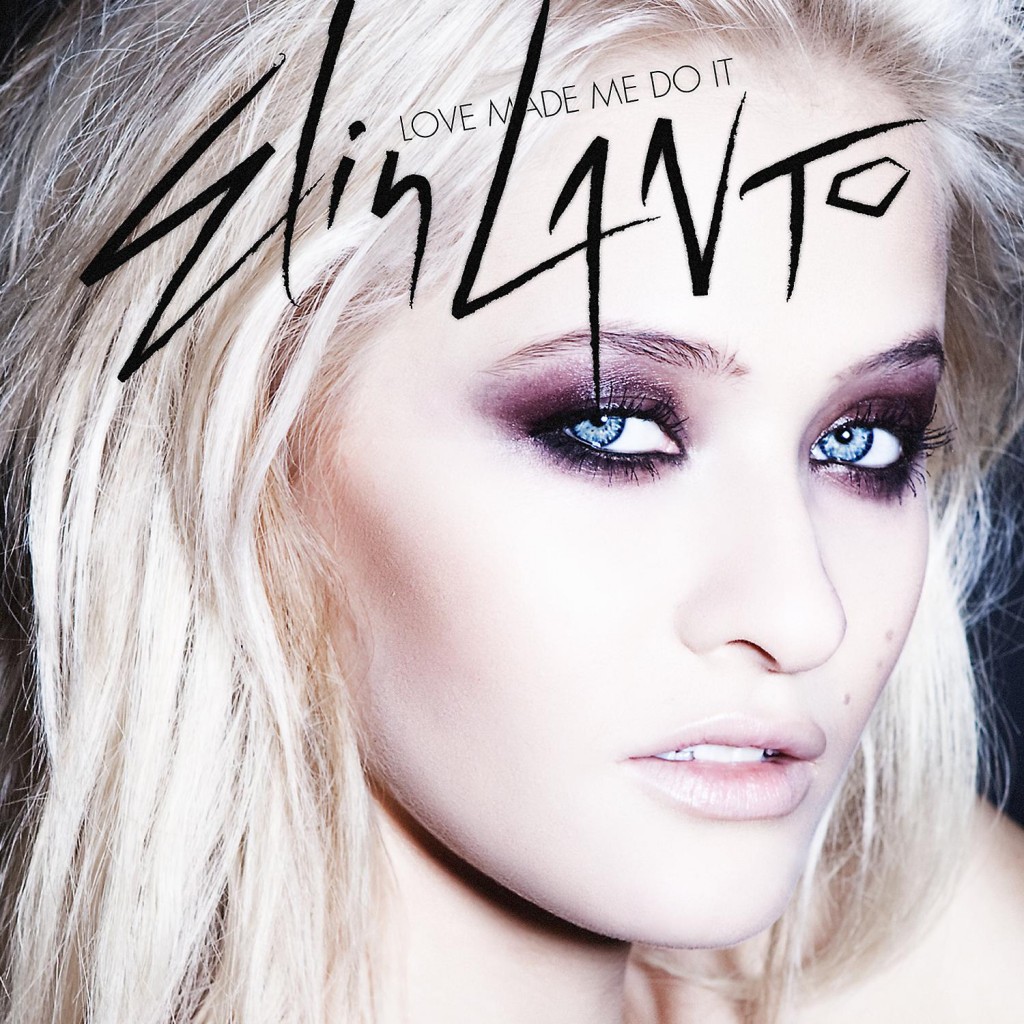 Pop fans; we have a new gem of the genre!

Elin Lanto has been pleasantly surprising us with brilliant singles ever since focus on her first album died down, and she was given a disco ball to play with. We’ve had ‘Discotheque’, ‘Speak N Spell’, ‘My Favourite Pair Of Jeans’, ‘Love Made Me Stupid’, and now ‘Tickles’. A new Elin Lanto single has become something to look forward to. But could she deliver over a whole album of dance pop? Many albums of this genre contain a few great singles, maybe a couple of other brilliant tracks, but then an awful lot of filler. Thankfully though, she CAN deliver over a whole album – and she has. ‘Love Made Me Do It’ is a brilliant record. A great achievement in pop music, in that it’s not in the slightest bit throwaway. To our ears it has FOUR songs that are genuine ten out of ten moments – and none of those were even the singles! And most of the rest are very very close to that accolade too. We can’t remommend enough, that you get this album. Here’s our track by track review;

Hater
In some ways an odd choice to open the album with, but in others, the perfect choice. It’s not as instant as the other songs on here, and it’s definitely not as big. But it is just as great. It just seems to make a lot more sense though, in the context of the rest of the album – so in a way, the listener doesn’t appreciate it to its fullest until hearing the record that follows. But lyrically, it sets the tone of the album wonderfully, and makes way for the next two tracks to completely blow the listener away. Then when you come back to it after hearing the rest of the album, it sticks! The verses are subtle, but it’s got a pop chorus, with a great distorted ”oh-o-oh” vocal at the end of each chorus.

Funeral
Ok, well there is really is no easy way to say this without sounding completely OTT, overblown, or even unbelievable. But BASICALLY…..it genuinely is one of the most amazing songs of all time! We know that sounds ridiculous, but we did actually first hear it at the end of last year, in demo form – so it’s not like we haven’t given it enough time to settle in! The chorus melody on its own is pure sonic euphoria – but it’s been paired with some incredible lyrics. Quite simply; ”no matter if you end up….in heaven or in hell……I’ll be dancing……on your funeral”! It’s been well documented that the best kind of pop song is often one with the uptempo, happy melody, but with with the heart wrencing lyric, (‘The Winner Takes It All’, ‘Better The Devil You Know’). This takes that notion one step further, and doesn’t just sing delightfully about heartbreak, but about ACTUAL death of a former loved one! Plus, she’s not just saying ”dancing AT your funeral” (harsh enough as it is, but still pointing towards something as vaguely civil as the tradition of the funeral wake), she actually sings ”dancing ON your funeral” – which hints towards an image of her dancing in joy to mark the occasion of the day he is finally buried. It also hints at dancing on a grave perhaps, even better/worse – delete as applicable! The rest of the song thankfully, is brilliant enough to suit the chorus. The verses have an irresistably gorgeous melody, made even better by the key they’re sung in – going from very low to very high twice in the space of each verse. And the lyrics are in keeping with the lyrics of the chorus – dark and delightful! The first verse ends with ”makes me love to hate you so”, and the second verse ends with ”man I hate to love you so”. The intro and the middle eight are also especially beautiful. The song opens with a deceivingly pleasant piano riff, which is repeated in the middle eight along with some wistful sighing from Elin. And finally, the track ends with what’s perhaps the most genius element of all – a song about celebrating a funeral, plays out with a church organ harmonising the main chorus melody. It’s absolutely, unquestionably brilliant!

Tickles
The current single in Sweden, this is probably the poppiest track on here. It’s certainly the happiest! Elin takes a break from hate, to give a tongue in cheek commentary on how ‘happy’ her memories of a guy, or perhaps an encounter, makes her! ”It tickles when I think about, when I think about, tickles when I thiiiiiiinnnkkk about it” will be stuck in your head all day. Or at least during the moments when ”no matter if you end up in heaven or in hell, I’ll be dancing on your funeral” aren’t in there!

Doctor Doctor
You probably all know this one by now. At the very least, just under 100,000 of you have watched it on youtube! It is of course Elin’s entry to Melodifestivalen 2010, from a few months back. We were very underwhelmed by it at the time, simply because we’d already heard ‘Funeral’, and so had impossibly high expectations for this. It’s grown on us since then though, and we do enjoy listening to it now. And despite the fact that other tracks on here are infinitely better than it, it does actually sit very well on the album, so it’s all turned out alright in the end. Perhaps that was the plan all along?! We’ll never know.

Alien
The album’s first ballad. Sometimes, a dance pop album with a tracklisting that included no ballads is something to be celebrated. But the inclusion of ‘Alien’ is a welcome one. It fits in perfectly here, not just because it’s very good, but also because it’s got such a warped theme. Here, the writers had an opportunity to make a classic love song – as ballads go, it’s got the perfect melody in its topline and in its music. But instead, they’ve paired the beautiful melodies with dark lyrics that aren’t about love, but rather about a person’s feelings of not belonging to the world they live in, and not feeling like they are even themselves anymore – ”I just gotta get myself back home”.

Love Made Me Stupid
We all know this one! A brilliant pop song, released as a single in Sweden late last year, and the current single in the UK. When we interviewed Elin last year, she said that they were using this song as the blueprint for the album. And it’s certainly true. It’s dance pop music, with a rockier edge – that packs a hell of a punch.

Toy Boy
This is another of our favourites. Elin goes all Girls Aloud/’Wake Me Up’/St Trinians here. And yes, as is the order of the day on here – we get another insanely catchy chorus! The lyrics are probably the most fun on here too. She’s basically laughing at a naive young suitor for wanting to be with her, and teasing that once she’s got what she wants from him, he’ll be cast aside – ”you’re a fool for loving me, you’re a tool I wanna be”, ”give me all you got, til I got all I want”, and our personal favourite – ”you can come, when I’m done, when I’ve seen the stars and the sun”!!!! Amazing!

Give It All Up
Here we have an eighties pastiche. But not of eighties electro synths, as you’d expect. Rather of those cheesy eighties rock ballads that used to accompany naff romantic comedy movies! Big drums, soft guitars, despairing vocals, and an absolutely epic and anthemic chorus. Plus the middle eight is probably the best middle eight of any song on the album. We absolutely love this one!

Good Stuff
Hmmm…not a patch on anything else on here. The verses are alright, the lyrics are great, but the chorus is far too underwhelming for a pop track. The album’s only low point.

My Favourite Pair Of Jeans
The first and only appearance of the Elin Lanto from when she had temporarily turned into an electro dance siren a couple of years ago. Of the three songs from that period that they could have chosen to include here, this is the strangest choice, as it’s not as brilliant as ‘Discotheque’ or ‘Speak N Spell’. But it’s still a great song – it just suffers the misfortune of having to be compared with those two. Incidentally, the other two, whilst not on the album file that we were sent, have appeared on some online tracklistings as bonus tracks. So they may well still be included.

Singing Goodbye
The album closes with an absolutely stunning and heartbreaking ballad. In keeping with the rest of the album, the lyrics are incredible, and the melodies are so so strong. It’s made all the more special in the context of the rest of the album, by Elin singing very sadly ”if I died because of you, would you dance at my graveyard, singing goodbye” – which is of course an obvious twist and a complete turn around from track 2, where she’s gleefully telling her man that she would do exactly that, to him.

Incredible! Well done Elin girl, you’ve seriously given us what we genuinely feel could be one of our favourite pop albums ever! Perfect stuff, and dare we say it – far better than anything produced in the last ten years, by whom is supposedly the leading lady in this genre, Ms K. Minogue!

Tags: Alien, Discotheque, Doctor Doctor, Elin Lanto, Funeral, Give It All Up, Good Stuff, Hater, Love Made Me Do It, Love Made Me Stupid, My Favourite Pair Of Jeans, Singing Goodbye, Speak N Spell, Tickles, Toy Boy

It tickles when we listen!

Elin Lanto – ‘Love Made Me Stupid’