Amy Diamond: 'Only You'

It’s a cover of Yazoo’s eighties hit, ‘Only You’. Brought bang up to date with a dreamy, fairytale production that suits Amy down to a tee. And it’s just the perfect balance of sophistication and juvenility that’s made so many of Amy’s other songs, and Amy herself, so charming. We love her! Unashamedly so. ‘Only You’

You can listen to ‘Only You’ below, and it’s released in Sweden tomorrow.

Speaking of her other songs, Amy releases her Greatest Hits album next month. She might only be 18 years old, but she’s been having hits for over half a decade now (as you’ll see from the jam packed tracklisting below!), and has a repertoire of four albums, one Christmas album, and two Melodifestivalen appearances under her belt. The new album includes 4 new songs, including ‘Only You’ and what we guess are the fruits of her labour with super producers, Pitchline, over the summer. Below is the cover and tracklisting, with the new tracks highlighted. 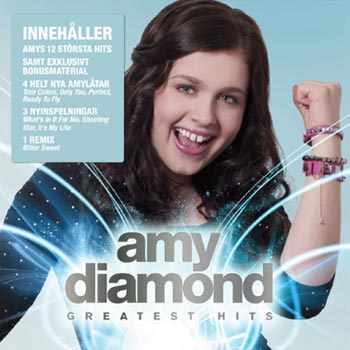 SONG: ROOM8 feat. The Sound of Arrows – ‘Only You’

SONG: Zara Larsson – ‘Only You’ (The Remixes)