September's UK album - it made it! 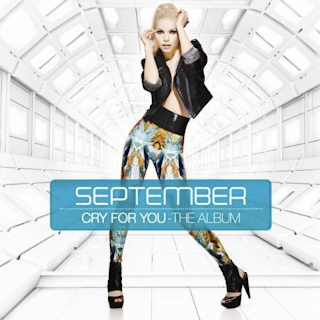 September‘s ‘Cry For You – The Album’ is out now digitally in the UK. It’s a momentous week, given that some fans have waited over five years for a September album to be released over here. Seeing as how there is no physical release available as well as the download (*sigh*), the album won’t be chart eligible. However, with digital albums it’s always interesting to see which of the tracks are the most popular – as consumers are allowed to purchase tracks individually. In the case of September’s 20 track opus, it’s particularly interesting because by far and away the number one most downloaded track is ‘Until I Die’, by an absolutely massive margin! Those who have been following the September saga will know that it was supposed to be her third UK single but was completely cancelled last month, surprisingly not even given a download only release in its own right. Even more notable is the fact that whilst the UK edit is number 1, the original edit has still managed to place at number 4 – it’s proven to be very popular indeed!

Well, now that the album’s out, here are the most popular tracks. In order.

And here’s a lovely megamix of some of her hits through the years;

Tags: Cry For You, Leave It All Behind, September, Until I Die

September: ‘Until I Die’ – The Remixes!

September All Over Again