It’s time? It’s time.
When does it all start? This coming Saturday NRK will broadcast the first semi-final of Melodi Grand Prix 2022. A six-week competition to find Norway’s entry to the Eurovision Song Contest in May.
How do the six weeks look? We’ll have four semi-finals, one second-chance round and one grand final at the end with ten songs.
How do the ten songs get to the final? As with previous years, we already have five songs which are pre-qualified for the final – for reasons known only to NRK, in all honesty. The other five slots will come from four semis and the second-chance round.
How do the semis work? There are four songs in each, with one song winning every semi and progressing to the final.
How does the second-chance round work? On Monday February 7th, the 12 songs which were knocked out through the four semi-finals will compete for four spots in the the second-chance round which will then take place that Saturday night. And on the Saturday night in that second-chance round, those four songs will compete, with a winner amongst them taking the last slot in the final.
And then we have our ten-song final! And if it’s anything as good as last year’s final – we’re in for a good time on Saturday February 19th.
When can we hear the songs? Right now! NRK have released all 21 songs today – the five automatic qualifiers to the final, and the 16 that will compete in the semis.

Below you’ll fine all 21 songs, in the heat they’ll be competing in and – in the case of the pre-qualified songs – the heats they’ll be performed in, as a preview each week. 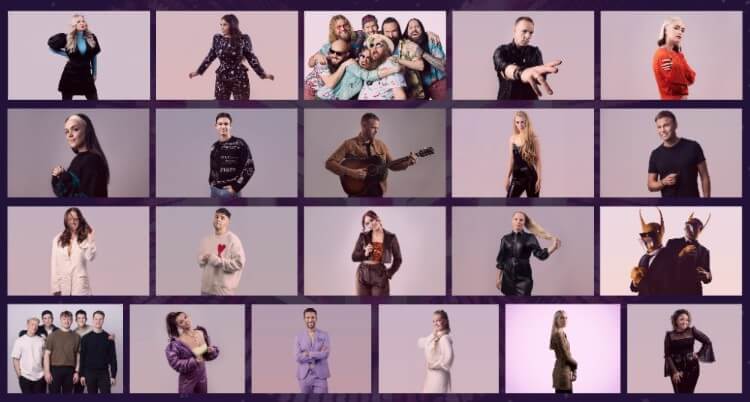 Elsie Bay: Death of Us (pre-qualified to the final)
(Elsa Søllesvik, Jonas Holteberg Jensen, Andreas Stone Johansson)
Previously featured on Scandipop as part of her duo Elsa & Emilie, Elsa has since then been writing for other artists – most notably in this context, ‘Witch Woods’ for Emmy, which made it to the MGP final last year.

Mira Craig: We Still Here
(Mira Craig and Bård Berg)
If you’ve been following Melodi Grand Prix for a while, then you may well remember Mira’s name. Not only did she compose the winner in 2008 (‘Hold On Be Strong’), but she herself returned to compete as an artist in 2010, with ‘I’ll Take You High’. This song – ‘We Still Here’ – will be the first song from her forthcoming 7th album.

Frode Vassel: Black Flowers
(Frode Vassel, Benjamin Larsen, Niklas Rosström and Celine Alette Pedersen Breivoll)
Previously a backing singer who has represented Norway on stage at Eurovision in 2017 (with JOWST), 2018 (with Alexander Rybak) and 2019 (with KEiiNO), Frode moved to the front of the stage in 2021 to compete in The Voice Norway. So it feels quite natural that this be his next step.

TrollfesT: Dance Like a Pink Flamingo
(Eirik Renton and Jostein Austvik)
Combining folk and metal, and notorious for their live shows, TrollfesT would appear to be the perfect candidates to awaken a sleepy Norway englufed in darkness and cold this Saturday night, and kickstart a colourful six weeks of Melodi Grand Prix.

Eline Noelia: Ecstasy
(Eline Noelia Myreng, Audun Agnar Guldbrandsen and Tea Megaard)
With Eline, NRK are introducing a fresh new artist to Norway on Saturday night. As well as being her MGP entry, ‘Ecstacy’ is also the artist’s debut single.

Christian Ingebrigtsen: Wonder Of The World (pre-qualified to the final)
(Christian Ingebrigtsen, Michael Hunter Ochs and Henrik Tala)
Known to most as one quarter of the boyband a1, Christian most recently achieved Melodi Grand Prix success in 2020 – composing the winning song ‘Attention’ with Ulrikke. a1 themselves competed in MGP in 2010, and came close to winning – finishing in 2nd place. This will be Christian’s first time competing as a solo artist, however, and he’ll be hoping to do just one place better than he managed with a1.

Farida: Dangerous
(Farida Bolseth Benounis, Rasmus Simon Vedvik Thallaug, Atle Pettersen, Peter Newman and Hannah Dorothy Bistow)
Farida became a Scandipop fave in 2020 when she released the excellent ‘Do About It‘ – and she’s a name we’re glad to finally see in the Melodi Grand Prix line-up.

Steffen Jakobsen: With Me Tonight
(Mats William Wennerberg and Nicolai Herwell)
A country singer who rose to fame in Norway by finishing 3rd in Idol in 2013.

Lily Löwe: Bad Baby
(Lill Sofie Wilsberg, Trond Holter and Victoria Land)
A new artist who is about to release her first album, and will be using MGP as a launchpad for her own brand of rock music.

Daniel Lukas: Kvelertak
(Daniel Lukas Kalelic and Are Næsset)
Having previously competed in Melodi Grand Prix Junior in 2013 with the song ‘Tiden Går Fort’, Daniel finally makes the transition to the big competition in 2022.

Subwoolfer: Give That Wolf a Banana (pre-qualified to the final)
(Keith and Jim)
So yeah, despite them having no past form to go off (that we can tell of, with those masks on!), we can see we’re probably gonna have a bit of a good time on our hands with these two…

VILDE: Titans
(Vilde Johannessen, Ben Adams and Sindre Timberlid Jenssen)
We’ve featured VILDE on Scandipop many times before, and have been expecting to see her name in the Melodi Grand Prix line-up for some time now. 2022 is the year she finally does it, and she does so with a song co-penned by yet another a1 member in this year’s line-up, Ben Adams. Ben has prevously written a MGP entry for Julie Bergan, and last year’s finalist ‘I Can’t Escape’ by IMERIKA.

Sturla: Skår i Hjerte
(Sturla Fagerli Larsen)
In 2020 he released the ‘Som Ingen Andre‘ EP with Scandipop fave Hanne Mjøen, and now he continues a ten-year solo career by taking a step out onto the MGP stage.

Oda Gondrosen: Hammer Of Thor
(Morten Franck, Elsa Søllesvik, Torgeir Ryssevik and Oda Kristine Gondrosen)
She finished third in Idol in 2020 – time to level up in the music competition stakes.

Mari Bølla: Your Loss
(Lars Horn Lavik, Morten Franck and Mari Eriksen Bølla)
Mari made a big impression on us last year with ‘Not That Girl‘ – and so we’re delighted to see her name in today’s line-up. She’s a name known to Norway – when she became the youngest ever winner of Idol in 2020, taking the people’s vote to victory at just 15 years of age.

NorthKid: Someone (pre-qualified to the final)
(Helge Moen, Alex Charles, Sandra Lyng and Jim Bergsted)
Regular Scandipop readers will already be familiar with NorthKid, as we’ve featured them on here many times before. This is their first time competing in MGP though, and they do so with two of Norway’s best songwriters on board with them – Helge Moen and Jim Bergsted.

Alexandra Joner: Hasta La Vista
(Henrik Sæter and Jazara Aden Hutton)
She had one of our favourite songs of Melod Grand Prix 2015 with ‘Cinderella’, and so it’s a delight to have her back in the competition again seven years later.

Kim Wigaard: La Melodia
(Kim Wigaard Johansen, Marius Hagen, Karianne Sissener Amundsen and Ronny Janssen)
Kim is back for another shot at Melodi Grand Prix, after competing with ‘Fool For Love’ in 2020 with Maria Mohn. Which brings us nicely to our next artist…

Maria Mohn: Fly
(Maria Mohn and Einar Kristiansen Five)
…a cute touch from NRK – putting two artists who previously competed together, now competing against each other.

Anna-Lisa Kumoji: «Queen Bees» (pre-qualified to the final)
(Olli Äkräs, Alan Roy Scott, Elsbeth Rehder and Anna-Lisa Kumoji)
She came very close to winning Melodi Grand Prix in 2019 with the song ‘Holla’ – and now she’s back to see if she can improve on that impressive result in 2022.

Sarah Dawn Finer: ‘The Winner Takes It All’

Melodifestivalen 2020: Your Guide to Heat 4!