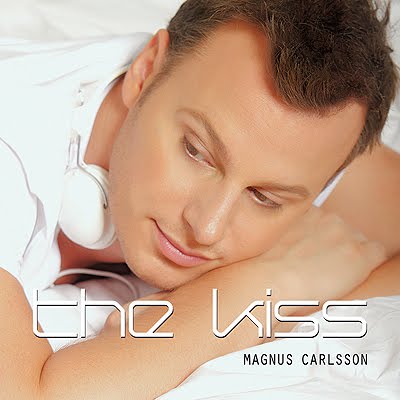 Swedish disco deity, Magnus Carlsson, is releasing another single from one of our favourite albums of last year, ‘Pop Galaxy’. This time he’s gone with ‘The Kiss’ a down-tempo, dreamy dance track. It was written and produced by Anton of Le Kid fame and fabulousness, and Niclas Lundin. The two recently gave us Eric Saade’s ‘Still Loving It’ and will compete in Melodifestivalen next week with their song ‘Enemy’, which will be performed by Sara Lumholdt.

‘The Kiss’ sees Magnus lower the pace from his previous singles. The eighties synths are still present and correct, but the most remarkable element in the song is the fantastic strings that run throughout. It leaves you feeling like you’re somewhere on a cloud of 70’s disco haze, whilst basking under an 80’s neon light!

The single is backed with b-sides ‘Keep On Dancing’ and ‘Slave To Love’, both of which also appear on the ‘Pop Galaxy’ album (the latter, on a bonus version of the record). Magnus Carlsson chooses the sensible option of releasing his music on iTunes everywhere, so that fans of his music can buy it wherever they are in the world, not just in Sweden. We’re assuming he does the same with Spotify too, so we’d highly recommend that you check the album out, if you haven’t already. Our review of it last year is further encouragement if you need it, and some of the comments under that review are almost as amazing in themselves!