Since moving to Sweden six months ago (it’ll be six months exactly on Friday!) there’s obviously been lots of great music that we’ve discovered, that we never knew about before. Both new and old. But there’s one song in particular that we’ve fallen head over heels in love with. It’s considered a Swedish classic – first released in 1967, but since then subject to a hugely successful cover version. It’s a staple for Dansbands, is often performed at the likes of Allsång På Skansen and Lotta På Liseberg, and we’ve even heard it played in clubs! And danced accordingly, naturally. Although whilst the song has been adopted as Swedish by the Swedes, it’s actually a translation of an English hit from the year before in 1966, ‘Just Like A Man’ by Emma Rede.

We first heard ‘En Sån Karl’ in its cover version incarnation. Back in the early nineties, Anne-Lie Rydé released a covers album of Sweden’s favourite schlager songs of yesteryear, ‘Stulna Kyssar’. Along with her cover of Towa Carson’s ‘All Har Glömt’, ‘En Sån Karl’ was the breakthrough hit – in terms of popularity. It’s those two songs that she still performs at her gigs and PA’s. In fact it was her performance of it at this year’s Love Stockholm event that introduced us to it. Here’s Anne-Lie’s recording (ignore the spelling mistakes in the video title!); 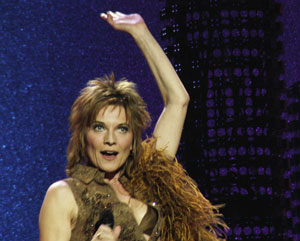 It’s got all the elements of schlager that we love so much. It’s just so big and bold. Those melodies HAVE to be screeched to be reached (hence Anne-Lie was always going to do the song justice!). And the music simultaneously makes you powerless to resist moving, and builds into a crescendo of internal euphoria. QUITE the effect! Anne-Lie’s version is still probably our favourite. Those vocals are immense, and she really does make the song her own – putting her unique, charming, and acceptable brand of crazy onto it. In hindsight, we’ve also come to the conclusion/realisation that her 2004 Melodifestivalen comeback with ‘Säg At Du Har Ångrat Dig’ was clearly tailored specifically to capitalise on the popularity of her version of ‘En Sån Karl’. It sounds like the same song! The instrumentation and backing vocal melodies are identical. Perhaps it was cheeky and cynical, or perhaps it was simply Anne-Lie paying a respectable nod to a certain section of her fanbase. But either way, we don’t care – both songs are 10/10 moments for us, and we love them!

But what about the original? Well usually when we fall for a song that we later find out is a cover version, we always then listen to the original knowing that we probably won’t like it as much (and eventually being made feel like a heathen as a result, when we speak about it to somebody a lot older!). But with ‘En Sån Karl’ that wasn’t the case. We love the original by Lill Lindfors as much as Anne-Lie’s fine foray. Perhaps that’s because it’s schlager music – a genre which is so old fashioned that it’s become timeless. A musical legacy that can throw out a song in 1970 and one in 2010 without them sounding any more than a decade apart!

Lill’s vocal is another treat for the ears, and for the mind. She really performs the lyrics (more on the lyrics later), and to accompany the audio, you’re left summoning the image of a bored and jaded housewife, herself conjuring up an image of a ‘Karl’ – a Swedish word for a classically masculine specimen of a man! Her prescription medicated dry delivery of the verses is then complimented by her gin soaked ecstatic excitement in the chorus. Have a listen;

Whilst it requires a certain amount of talent to pull off the vocals like the two aforementioned ladies both do, that hasn’t stopped the song becoming a huge karaoke favourite. Probably because it’s a whole lot of fun attempting it. Sounding slightly drunk on the verses is expected anyway, and letting rip for the chorus is really the only way to do it. It’s near impossible to sing this without a huge smile on your face. Take the below youtube clip as the absolute perfect example. At Allsång På Skansen 2008, the always amazing Nina Söderquist was tasked with bringing the song to life. No small task for a rookie, but Nina threw herself into it with thoroughly enjoyable results. The crazy eyes matched with the calm swagger fits the song perfectly. And look at how much fun the audience have when it’s their turn to join in;

The song’s fun quota is overloaded anyway by its lyrics. It’s all about a woman’s appreciation for her big strong manly guy. Despite his faults – he lies and he drinks – he’s the perfect guy for looking after her. As we mentioned before, the lyrics are best delivered by dead pan Lill Lindfors, but we particularly like Anne-Lie Rydé’s take on the theme near the end. The listener hears her purr her appreciation for her man out loud, sighing contentedly until she lets out a shrill gasp of relief at the very end. Now there’s a mental image and a half for you!

Just a few weeks ago, Lotta Engberg performed ‘En Sån Karl’ at her own Lotta På Liseberg show, with a performance that played up to the song’s theme.

The most recently recorded take on the classic was released on the debut album of dansband girlband, Face 84 (most famous for Melodifestivalen 2008’s ‘Alla Gamla X’). Here the song is brought bang up to date. Despite the dramatics being toned down for the girls and almost neutralised, it’s still an enjoyable listen. Possibly because the melody is for once allowed to shine through without the vocal aerobics of Face 84’s predecessors. You can find their album on Spotify (possibly only in Sweden though, we’re not sure).

We could happily listen to it in many more forms though, and we hope that it continues to be kept alive long into the future.

You can discuss this at our forum here