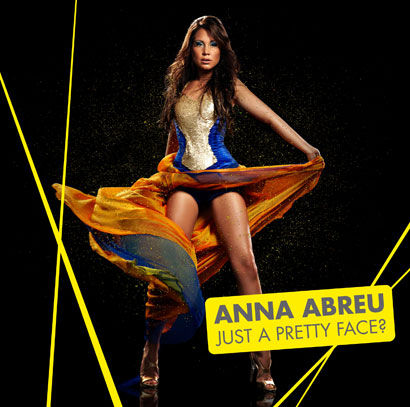 Coinciding with her debut release in the UK later this month, Anna Abreu has just released her third album in her native Finland. ‘Just A Pretty Face?’ entered the Finnish album charts this weekend at number 3. Which is slightly unfair given that it’s in a different league, quality wise, to its two predecessors that both reached number 1.

The very nature of the albums released by Idol alumni dictates that the ‘all killer, no filler’ mantra isn’t afforded top priority. Knowing that a fan base has already lent itself to the artist before any music has been released, or even a hint of musical direction given, means that the label knows that it can package any dozen or so tracks up as an album, and it will probably have healthy sales if the act has finished in the top three of the public televote reliant Idol series. Thankfully, labels don’t usually release any old rubbish, and fans are mostly awarded with an LP that is made up of a few top quality single worthy tracks, some good gems, a few alright tracks, and then some dire left overs that have been passed over hundreds of times by other acts over the last 12 months. It’s fair to say that that’s the type of record that Anna Abreu released as her first two albums – enjoyable pop fare, and certainly enough for us to want a third album from her. But usually acts like Anna don’t make it past one or two albums, due to the faceless, personality dormant, nature of the songs they’ve been given – which really could have been made by any Idol participant of any country in any year.

But thankfully, she has been given the holy grail of ‘difficult album number 3’…….because she’s taken the golden opportunity and used it to turn herself into a top drawer, international class, Idol free, bloody great popstar in her own right. A lot like fellow Idol graduate Agnes did last year when she too was given the chance to make a third album. Like Agnes, Anna has completely shed all traces of her Idol self, and released a stand alone pop album, with its feet firmly rooted in clubland, but conscious enough to go outside for air every now and again, pacing itself!

Lead single ‘Music Everywhere’ sets the tone for the uptempo tracks on the album. It’s a twist on the Red One sound that has dominated pop music this year – sometimes giving it a rock makeover, a pop makeover, an 80’s makeover! ‘Music Everywhere’ itself sounds like Lady Gaga given a guitar and a packet of pro plus. The chorus is probably the catchiest thing on here, it’s just so manic too! Our favourite uptempo track though, is ‘Letting Me Go’. Mainly for the haunting choral backing vocal that features throughout – used cleverly as a beat during the verses and then a harmony during the chorus! Of the other club tracks, you’ve got ‘7 Days, 7 Nights’ which sounds like a rock chick discovering a synthesiser, ‘Mr Perfect’ which is like an update of the Max Martin produced sound of American pop in the late 90’s, ‘Capital C’, which channels US 80’s pop, and ‘Liquid’ which is like a darker version of a single from The Saturdays.

After ‘Letting Me Go’, our two favourites are probably ‘2nd Chance’ and ‘Shine’. The former sounds like a mid tempo schlager song from Melodifestivalen. A great melody, and a non offensive beat. And then ‘Shine’ is Anna’s ‘’Ryan Tedder moment’’! Where she sings a track that sounds like all the great ballads of 2009, which were produced by him; ‘Halo’, ‘Already Gone’, and ‘Battlefield’. It’s not the only time she ventures into Beyonce soundalike territory on the album either; ‘Aural Examination’ obviously studied B’ 2003 hit ‘Baby Boy’.

All in all, it’s a great album to finish off 2009 on. It pays homage to all the popular sounds this year, but in its own individual way. It’s by no means groundbreaking, and it probably wouldn’t even be in our top ten favourite albums of the year so far (although it’s only had a week to grow on us), but it’s our absolute favourite type of album – a total celebration of unashamed pop music. Brilliant stuff!